Black Friday is an informal name given to the day following Thanksgiving Day in the US. Usually, Thanksgiving day is celebrated on the fourth Thursday of November. The day that follows Thanksgiving has been regarded and marked the beginning of America’s Christmas shopping season backing to 1952. Many leading stores in the US with time have promoted sales on Black Friday and tend to open early like midnight. Some stores even tend to initiate their sales on Thanksgiving Day itself.

Black Friday is not considered to be an official holiday. However, some states including California observe a holiday on the day following Thanksgiving for the state government employees in place of a federal holiday in the name of Columbus Day.

The earliest evidence of Black Friday can be traced back to the early 1960s in Philadelphia where the city’s merchants tried to change this connotation to “Big Friday”, though they failed miserably. The reason behind this change was driven by eradicating any kind of negative associations. However, the term didn’t spread to other parts of the country off late. However, in the late 1980s, retailers devised a method of reinventing Black Friday to turn the pre-made conception of negativity to positivity associated with it.

The retailers in the US then reflected the very same change on to their customers as well. It resulted in bringing a holiday before Christmas followed just after Thanksgiving and this eventually marked the occasion where the American stores made good amount of profits.

Sooner the dark roots of Black Friday were buried and forgotten. Ever since then, this one-day sale event has been expanded to a four-day event and included other “retail holidays” like- Small Business Saturday/Sunday and Cyber Monday. With time, the store owners started opening their stores early and most of the dedicated shoppers headed out after having their Thanksgiving meal on the previous night.

Origin of the Term- “Black Friday”

In history, there have been several incidents that can be quoted as “Black Friday”. Out of these, the most significant event can be described as the Panic of 1869. Here two financiers namely- Jay Gould and James Fisk with the help of their connections present in the Grant Administration made an attempt to corner the gold market. When the then president of the US, Grant came to know about this, he asked the Treasury to release a huge volume of gold which could be used for halting the run. This led to a sharp fall in the prices and the price of gold went down by 18%.

The SouthPark that is the neighborhood of North Carolina remains the most trafficked area of the US on Black Friday. Black Friday is seen as a shopping day for a number of reasons. In the US, Black Friday is also the last major holiday before Christmas and it marks an unofficial beginning of the Christmas shopping season. Also, most of the employers offer their employees a day off as an extension to the Thanksgiving holiday weekend. To gain advantage of this, all the retailers irrespective of their size offer diversified sales on the doorcrasher items to excite the crowd. In the past, there have been instances where the retailers have stayed beyond the normal hours either to gain a competitive edge or be a part of the competition.

A large population residing in Lake Ontario and Lower Mainland have been attracted by the cross-border shopping. As Black Friday gained immense popularity in the US, many Canadians have flocked the border as there are low prices in the States and also because of a stronger Candian dollar. Almost a decade back, most of the prominent Canadian retailers started running Black Friday deals of their own for retaining the local shoppers and discouraging them to leave the country.

In Mexico, Black Friday emerged as an inspiration for the government and the retailing industry to create an annual weekend full of discounts and extension of credit terms. El Buen Fin (or “the good weekend”) has been in the existence since 2011 and occurs in November prior to the weekend before the Mexican Revolution Holiday that falls on 20 November. This is taken as a precautionary measure by the Mexican Government to avoid the workers and students to apparently make it a long weekend. During this weekend, all the leading retailers extend their store hours for offering special promotional like- extended credit terms and price promotions.

Few online stores tend to invest a huge amount of money for promotional campaigns for generating more sales and driving traffic. An online retail e-magazine in 2017 has stated that most of the websites of the retailers went down as they failed to manage the surged traffic hitting their websites on Black Friday. This has been a clear indication that online retailers have inefficiently prepared to cope with huge traffic resulting in poor performance of the website, high downtimes leading to a loss in revenues for the retailers.

Cyber Monday is a relatively newer term coined in 2005. It is used for referring the Monday immediately after Black Friday and is based on a trend observed by the retailers back in the mid-2000s. Retailers observed that most of the consumers were too engrossed for shopping on the Thanksgiving weekend or at times couldn’t find the desired product, so all such customers looked for online bargains on Monday either from home or at work. As per an online report, the Cyber Monday of 2014 proved to be the busiest day of the year with sales volume exceeding over $2 billion via desktops.

The best part of carrying out online shopping on a Black Friday is that the users get to access to each product offered by the store. Usually, the number of products available for online sales tends to be far more than what is presented in a store. Offline stores tend to face an “out-of-stock” situation more often for certain products, however, the same possibility may occur online, but its chances are minimal.

By shopping online, the user can load websites of every single store from which they wish to perform shopping. It is recommended that the users create an account for themselves prior to Black Friday so that it becomes easy to add items on the cart and perform payment quickly. When this approach is followed, the users can hit several stores in a short period of time.

Online shopping is the most efficient method as one doesn’t have to deal with the surged crowds volumes, traffic or even waiting in long lines. One just needs to create a store account, add products in the shopping cart and just checkout. If the user is unsure about the product, then the reviews of other users come handy to serve this confusion. One also has got access to key product information like specifications and other technicalities on a single window. On a lighter note, there are absolutely no chances of stampedes by other anxious online shoppers. 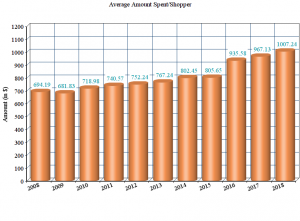 Average Amount Spent by a Shopper 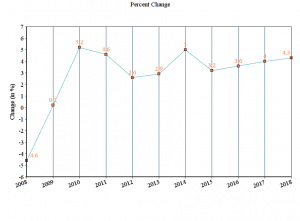 The above graphs are made from the data provided by Source

Black Friday over the years has been looked upon as the largest shopping fest celebrated with full enthusiasm in the North American continent. With time, the perception of people has changed and now people don’t associate the term “Black Friday” with anything negative and see it in a very sporting and optimistic manner. The major reason for the success of Black Friday lies with the fact that it is the last major holiday before Christmas and also marks the beginning of Christmas Shopping Season.

So, if you’re looking to celebrate and shop this Black Friday, then bodHOST is there with exciting offers on web hosting products at affordable prices.